All Collections
Controls
Getting Started with the Controls App

Getting Started with the Controls App

Set-up controls for your connected equipment

Senseware’s Controls App is a centralized location to configure, set and monitor your controls alongside our Timer Control Bridge and Modbus Bridge. In addition to performing on/off operations and manual overrides on your equipment, the Controls App expands the control parameters, allowing Sensor inputs to control multiple equipment outputs, such as exterior lights and thermostats.

You can view the current state of your equipment on your app's Dashboard or add widgets to your existing Dashboard.

To get started, click on the Controls icon in the Navigation bar. 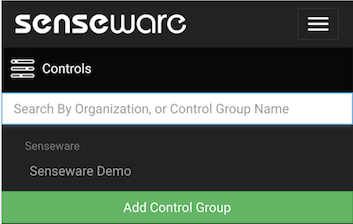 Next, click Add Control Group to create and select the View and Modification Permissions for each team. 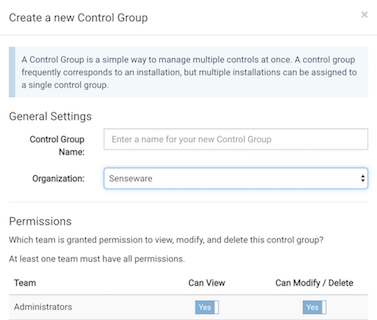 Schedules are a type of trigger that allow you to automate your building around your time preferences. Please allow your schedules to be in intervals of 15 minutes. Your schedule will be in the time-zone of the installation where your controls are installed. 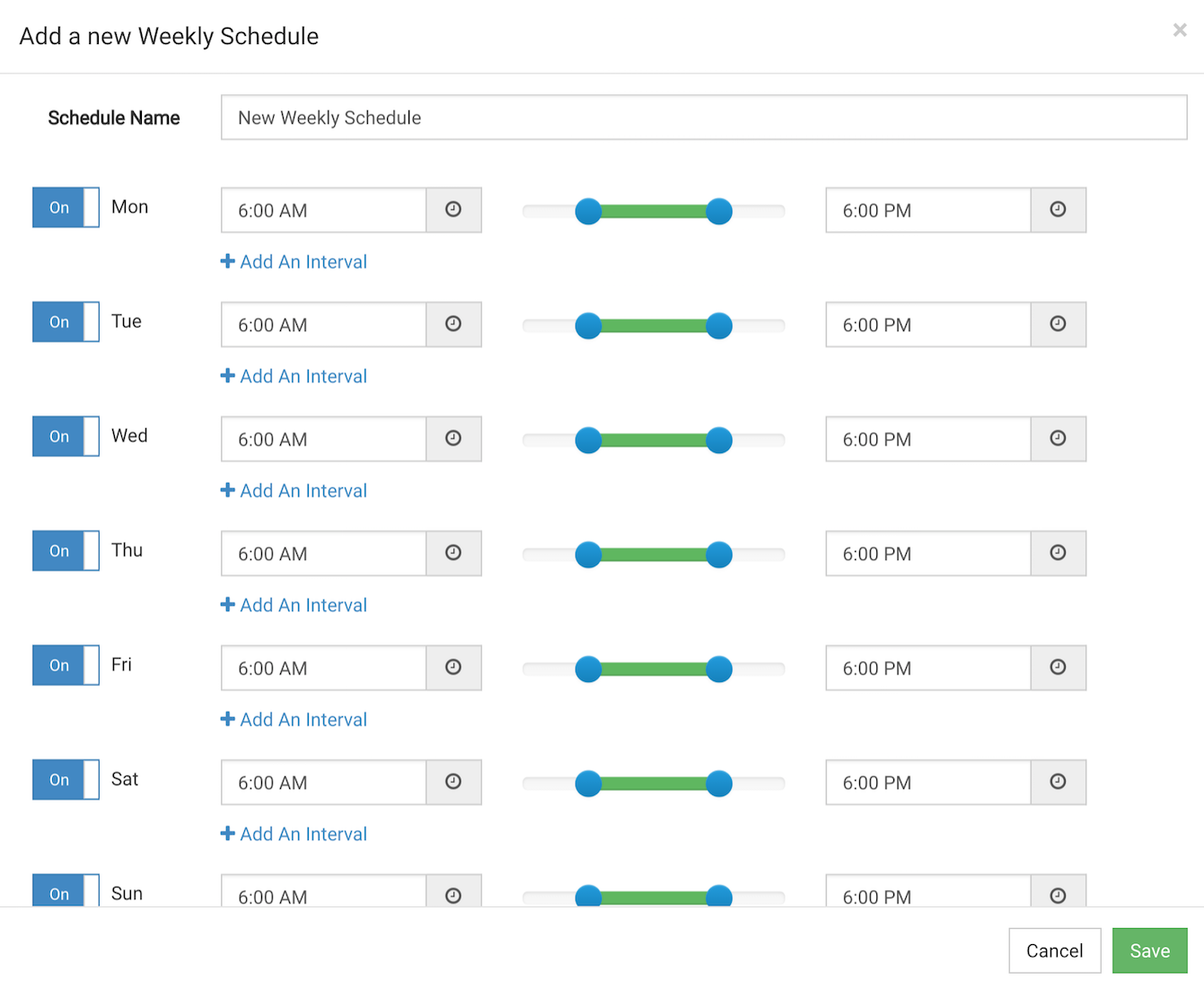 Sensors are a type of trigger representing a real time channel that can be used to set up Rules. For example, a temperature channel can be used to decide whether or not a HVAC unit needs to turn on.

An Output is a specific connector of a Sensor Bridge that is being controlled. Controls such as Turn On/Turn Off are sent to each Output once all Rules have passed. The status of a Control's Outputs can be seen on the Details Page. Be sure to set up your Outputs so your Rules have something to control!

The fallback schedule becomes active when the installation is disconnected from the internet over an extended period of time. 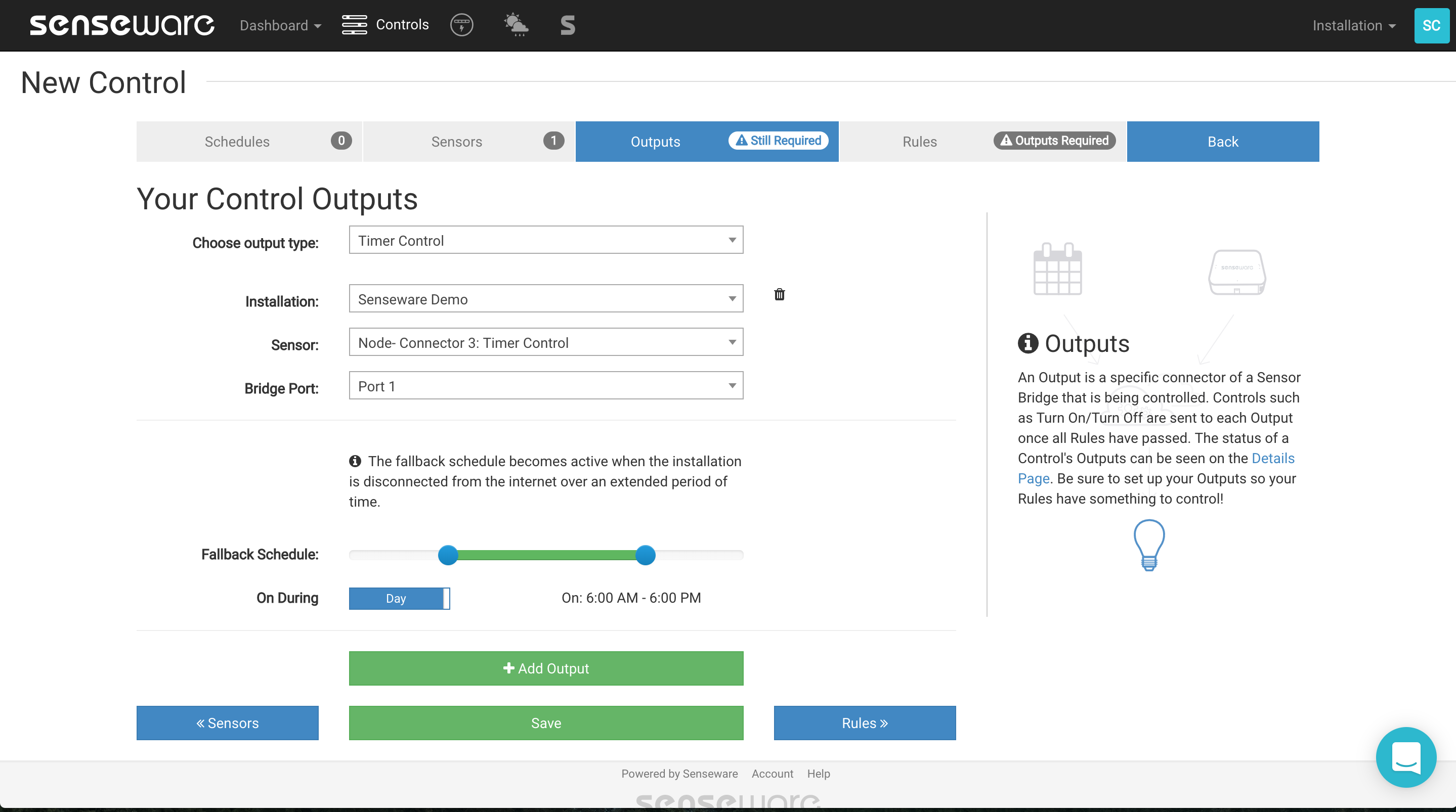 Rules allow you to combine many different Triggers such as Schedules and Sensors. At least one Rule must be true before your Outputs receive a command.

Modbus control bridges needs a ‘Stop Sending Modbus Command’ in order to not continuously send the same command to the bridges. That Stop Command can be equivalent to the register being written being equal to value being written, but it can also be a confirmation given by another sensor such as a Current Transformer measuring when a HVAC unit has been turned on.

Rules are made of one or multiple Conditions. For a Rule to be true, all its conditions need to be true (AND). Conditions are based on Triggers such as Schedules and Sensors that are then compared to states or values, depending on the type of Trigger.

When you are adding a new Condition, you can decide to use a differential. A differential is a type of threshold that prevents frequent, unwanted changes to a control. For example, for an HVAC unit the temperature difference between turning on and turning off is a differential. A thermostat set to 70 degrees with a +/-1 degree differential will turn on the air conditioner at 71 degrees and will turn it off at 69 degrees.

Once you've configured the control, the app will display your control's current status widget and the 24-hour status.

For example, if you are controlling two circuits that are scheduled to be On and they are both actively in the On state, the widget will indicate "2/2 on" and "0/0 off". However, if one of the channels is overrides to Off, the new numbers will be "1/2 on" and "1/0 off". If the Controls are not based on a schedule, but instead are based on another data channel or are purely used for overrides, you can ignore the second number as it will remain 0 as long as there are no schedules active.

Click on Details to see the Sensor, Schedule, and Rule Settings.

For more information on adding control widgets to other Dashboards, please check out our article on Control Widgets.